Doug in Philadelphia, 2010, with one of the first Dragon Saddles he brought from Key West where he lived. 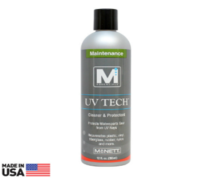 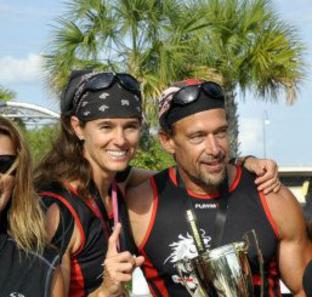 The Dragon Saddle is easy to carry. Just pull it over the paddle shaft and keep it loose, not stretched over the blade. That could damage the stitching. This method frees up your other hand plus it will not get lost or misplaced being on your paddle.

That's Doug still racing premier when he was 70. How old is he now? I knew you would ask.

Later in 2010 Doug traveled up to Philadelphia to practice for a while with Bob Macnamara's team. He showed the Dragon Saddle to some of the Philly team that he met, creating it into a familiar product to Team USA paddlers. They were curious but no orders . But during the end of the 2010 season when their were only a few races remaining in Florida, Doug made more Dragon Saddles to bring to the races and show to the competive tyeams that practice all year around. At each race, with a cardboard box in the Puff tent, they would allbe sold before the first race, It went on like that into 2011  and to the IDBF World Championships that were conveniently held in Tampa. That is wherehe delivered large orders to Canadian coaches for their teams. Sales had begun in volume. A paddling friend, Kevin Kwok of Toronto,  ordered boxed of Dragon Saddles for is team mates in Canada. Kamini Jain became a reseller in BC. Sgtan Walton started buying at wholesale for Dragon Boat Canada. Wila Chun in Southjern Californiabecame a distributor as did Ellen Law in New Jersey. The trademarked product was beginning to really get around the sport in North America and Australia due mainly to exposure at the world championship races and networking with vendors such as Jeffg Campbell of Double Fifth Dragon Boating, the largest dragon boat equipment dealer in the US. All of these people annd more were responsible for the exponencial popularity of the mighty little seat cushion that did what paddlers hoped it would do. The teams that use the Dragon Saddle are the trams that win the gold medals. 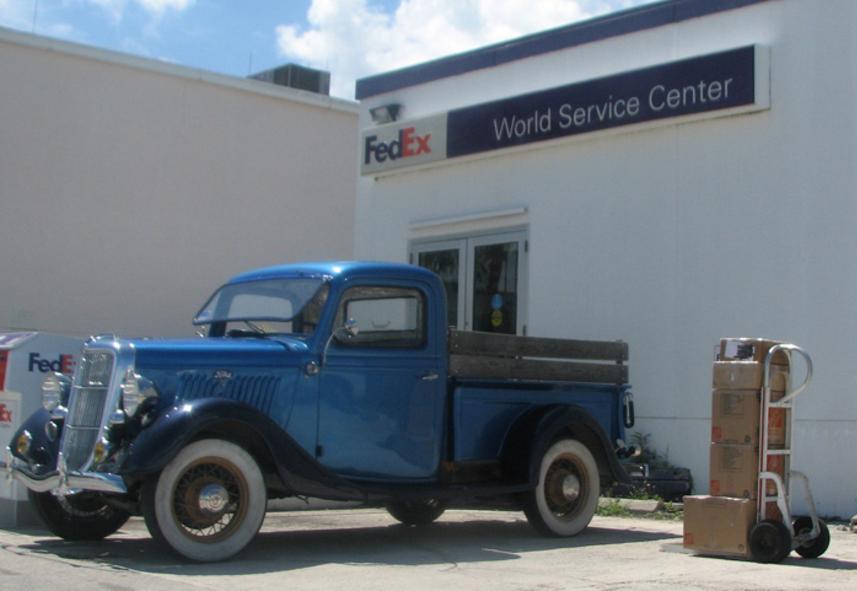 Unless you are using the new DS2 SLIP PROOF accessory with your slip resistant Dragon Saddle, it is best to keep the sides folded in during storage to maintain shape.

Occasionally you will need to remove the inserts and gently clean the neoprene inside and out to prevent odors and remove any sand, salt and dirt. Use plain soap and water or just water or a spray bottle of Oxy Cleaner. DO NOT throw the Dragon Saddle in the washing machine or dryer.

Keep the Dragon Saddle away from objects that create pressure against the neoprene. Creases and folds can become permanent.

This product should last a lifetime. But if you desire a change, a new color or print, consider giving the old one to a new paddler.

​HISTORY - HOW IT STARTED

For a relatively new product, this little seat cushion has a rapidly growing history.

During February 2010, Captain Kristin Stickels, pictured here with Marc Applewhite, Captain of the Florida Tarpons, both on Team USA and coaches for Puff Dragon Boat Racing Team in Miami, Florida, desperately needed a butt pad that functioned to be happy. Nothing was working on the boat for her.

After listening to months of complaints from Kristin talking to herself on the boat during practice about her continued discomfort, Doug tried to solve the problem once and for all by casually and crudely hand sewing an idea out of scrap neoprene he had from foot straps used in his manufacturing of the Aquatoner. It was red, closed cell, wet suit neoprene. Without much thinking, it was fabricated and brought to practice for Kristin to try. He told her that she could take out one or both of the inserts to adjust the degree of comfort. It worked right away, Ah, Kristin was very happy. Her first response was to call it a Happy Ass. But Doug knew to call it a Dragon Saddle since the boat is a dragon and we sit on a saddle.

Doug had a sailmaker sew up 20 more and donated them to his team, Puff. Then everyone in the boat was happy. 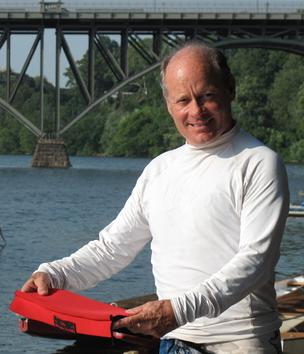 He always had an interest in energy conversion, from racing long distance outrigger canoes as one of the founders of Keauhou Canoe Club in Hawaii in 1980 to wind turbines ahead of his time in California and obtaining all needed permits for developing tidal energy production from hydrokinetic turbines in the Florida Keys.

The photo below is the Dragon Saddle LLC delivery truck shipping your orders at FedEx.

Avoid unnecessary sun exposure. To prevent fading, protect watersports equipment from UV rays. Look for UV Tech by McNett Essentials on Amazon or other retailer. It is the best protection for your investment in outdoor fitness and sports gear.