THE HISTORY OF THE DRAGONSADDLE

For a relatively new product, this little seat cushion has a rapidly growing history.

During February 2010, Captain Kristin Stickels (pictured here with Marc Applewhite, both on Team USA and coaches for Puff Dragon Boat Racing Team in Miami, Florida), desperately needed a butt pad to be happy. Nothing was working, nothing. After listening to months of complaints from Kristin talking to herself on the boat during practice about her continued discomfort, Doug tried to solve the problem once and for all by casually hand-sewing a crude idea out of scrap, red, closed cell, wet-suit neoprene he had from Aquatoner manufacturing. Without thinking much about it he handed the thick, soft cushion that fit on the dragon boat seat to Kristin. He told her that she could take out one or two of the neoprene inserts to change the degree of cushioning. It worked right away. Ah, Kristin was very happy.

​Doug at the Schuylkill River near Philadelphia with one of the first DragonSaddles in 2010.

HISTORY - HOW IT STARTED 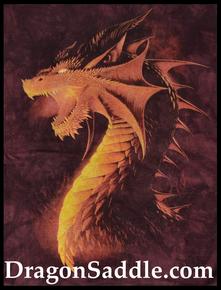 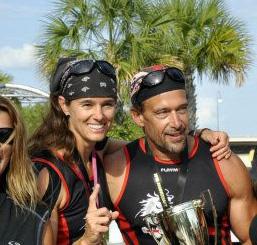 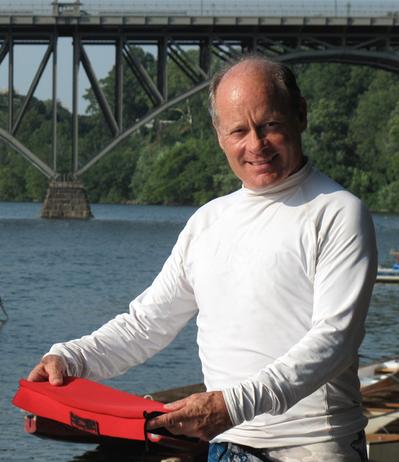 Doug then made 20 more of what he called "dragonsaddles" at a canvas sewing shop in the Florida Keys using heavy, marine upholstery thread and donated them to the team he practiced and raced with, Puff in Miami. Then everyone in the boat was happy. Kristin wanted Doug to name it "Happy Ass".  Um, so he kept the name "DragonSaddle", reminiscent of his childhood with horses. Paddlers ride the dragon and sit on saddles, right? Why not connect them in to one new word?

Today, Kristin is a top coach and is the dragon boating guru at PaddleChica.com while Marc is the co-captain of the all star team Florida Tarpons.

Later in 2010 Doug traveled to Philadelphia, pictured below, to practice a few weeks with Bob Macnamara's team  (Team USA coach), showing the product to the Philly paddlers that he met. At some of the races that year he met Kevin Kwok from Toronto who liked the Dragon Saddle a lot and ordered some for his friends in Canada. Doug always brought a handfull of these super seat cushions to the local races in Florida for exposure to the other teams. Soon he met Kamini Jain, premier coach of Team Canada who placed the first orders for distribution in British Columbia;

Ellen Law - steer of Team USA with orders for the US east coast; Wila Chun who coaches teams in Los Angeles;distributors in Australia; The trademarked product name was getting around. Pascal Lachapelle and Gaetan Gagnon in Montreal became early promoters of the Dragon Saddle in eastern Canada. Jeff Campbell of Double Fifth Dragon Boating, the largest distributor of dragon boat products in the US and Stan Walton of Walton Sports, official merchandise supplier to Dragon Boat Canada, joined in the initial marketing.  All of these people propelled the DragonSaddle to it's exponential popularity in this rapidly growing international sport involving many experienced paddlers and a phenomenal growth of new paddlers
in many countries, people of all ages and all abilities, breast cancer survivors, blind and adaptive paddlers.